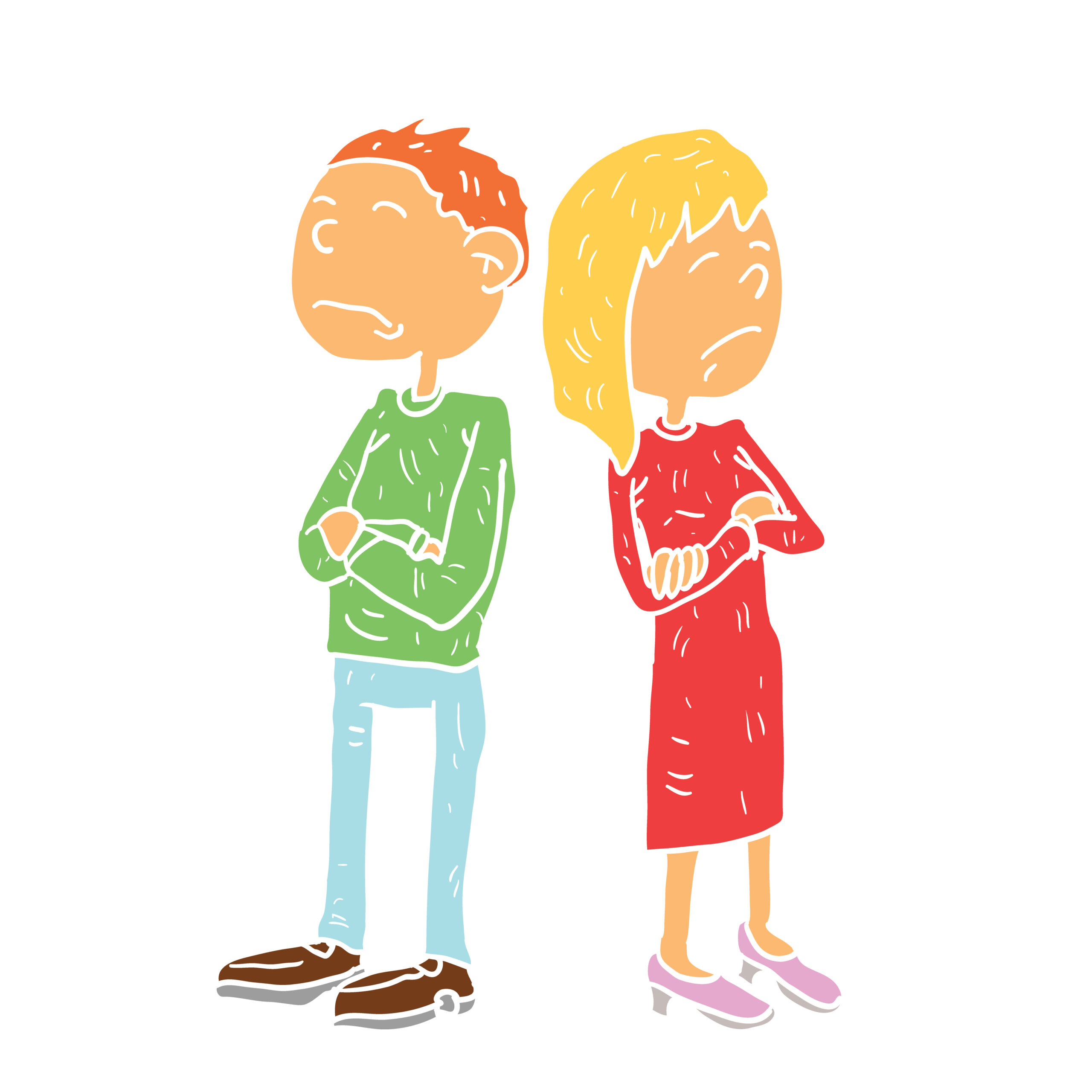 Who’s in Charge in This Relationship?

How Your Inner Child, Teenager, and Critic Run the Show And How to Put Your Adult in Charge

We like to believe that we are mostly rational and fully conscious. Sometimes we are, but studies show that we are strongly influenced – even controlled by – unconscious and emotionally driven forces. When we experience relationship distress, these hidden forces and directives are fully in charge as we react to our partners. The most effective couples therapy helps us to understand these impulses, and shows us how to put our conscious, rational Adult self in charge.

In my self-help model of the personality, Who’s In Charge? our 4 primary internal parts are identified and explained. Understanding and working with these sub-personalities in couples therapy can be very helpful in dramatically reducing levels of relationship distress. The following diagram illustrates the four parts, and the parts are described below: 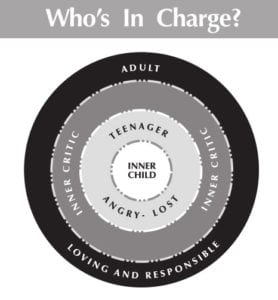 * Inner Child – The youngest and most vulnerable part of our personality. Negative childhood events, especially neglect, abandonment (emotional or physical), and abuse create an Injured Child. As the child develops, usually after age 5 or 6, a Survivor Child takes over. This is the child that learned how to adapt and cope under emotionally difficult circumstances. These coping mechanisms were effective for the child, but they can cause problems for adults, such as relationship distress. An example is the child who becomes staunchly independent to survive destructive childhood events – and then the adult becomes protectively isolated out of habit and fears of closeness.

* Teenager – As the Survivor Child enters adolescence, various biological (puberty) and social forces result in developmental struggles. The Teenager often becomes Lost and Angry. The Lost Teenager struggles for identity, social connection, meaning and purpose. The Angry Teen expresses years of emotional pain, while rebelling against parents and other authority figures. When childhood injuries are untreated and unresolved, the process of emotional development may get stuck at this stage. This tends to be more common in men, and my articles about “The LATE Men – Adult Men as Lost, Angry Teens” describe men who tend to self-sabotage.

* Inner Critic – The Critic is harsh, demanding and judgmental – toward one’s self and others. The Survivor Child learns to protect herself with this internal warning system. We learn these negative, demanding messages during childhood – most often from critical, controlling parents. We take ownership of these messages and beliefs to guide us away from trouble. For example, a child who was harshly reprimanded learns to talk to himself that way to avoid criticism from others as he gets older. But we take this too far when our lives are controlled by this negating internal voice – or when we make excessive demands on ourselves.

* Adult – I describe the Adult part of our personality as loving, responsible, rational, proactive and competent. The Adult responds to situations with emotional intelligence and balance. The Adult solves problems and knows when and how to ask for help. The Adult is open to feedback and new ideas. The Adult is loving and responsible toward others, and toward one’s self. Adult relationship skills can be developed and strengthened during couples therapy.

Chronic relationship distress is characterized by repeated patterns of fighting, emotional and physical distance and avoidance. These emotionally reactive patterns are frequently based in unresolved childhood wounds and unmet needs. Couples therapy is often necessary because there is no Adult in charge. Some common patterns in relationship distress include:

* Critic and Teenager – The partner in the role of Critic is demanding, angry and frequently blames, complains and criticizes. The other partner as Teenager is angry, defensive, and counter-attacks. The Teenager may act out by using drugs or alcohol, or sexually with flirtations and affairs.

* Critic and Child – In this relationship the partner in the Critic role is excessively controlling, demanding, domineering, and harshly critical. The Child partner is passive-avoidant, feels victimized, and is often depressed or anxious.

These patterns often overlap, and there are many other variations. These emotionally reactive patterns are not an indication that someone is crazy, wrong, has a bad attitude, or is ignorant. Rather, these patterns result from a lack of adequate role models growing up, and other childhood emotional injuries due to neglect, abandonment or abuse. That is, we learn poor coping skills from imperfect parents who came from imperfect parents. Effective couples therapy helps both partners to identify Who’s in Charge during relationship distress. And the goal is to develop an Adult-Adult relationship.

Understanding our Parts in Relationship Distress

It’s been incredibly helpful to people I’ve worked with in couples therapy – and in my own marriage – to be able to identify and manage the 4 internal parts. What do these sub-personalities actually experience, feel, and believe? What do they do – how do they act? What is the negative impact on the relationship? And what do they want or need? With a little understanding and compassion, it’s possible to transform relationship distress into Adult-to-Adult relationships of love and responsibility.

This is what the 4 parts are really up to:

> The Inner Child needs love, nurturance, protection and safety. An adult with an Injured Child in charge is afraid, ashamed, and looks for a parent figure for love and healing. The Injured Child may feel entitled and demand attention, affection, gifts, etc. Feelings of insecurity and inferiority may result in excessive dependence on partners. At other times, an adult operating from her Injured Child may hide – becoming defensive, over-protective, and isolated. The Survivor Child needs to be in control – because she had none growing up. This type of control is based in fear, and her controlling behavior may result in a false sense of security – with demands for compliance and temper tantrums when partners don’t cooperate. The Survivor Child acts like a pseudo-parent, and this results in relationship distress. In couples therapy, partners who operate from their Injured Child are encouraged to empower their Adult to love the Child within – and to transform destructive dependency needs to responsible relationship skills. The Survivor Child can then be instructed to let go of control and go play while the loving and responsible Adult takes over.

> The healthy Teenager needs a separate identity, some independence, and to be heard and respected. During times of relationship distress, the Teenager is either lost, angry or both. One common sub-type is the LATE Men – Adult Men as Lost Angry Teens. These men tend to self-sabotage – and they sabotage relationships. The LATE Men are irresponsible, avoidant, angry and defensive – they may have problems with alcohol or drugs, and they may act out sexually. Both men and women operate as a Teenager when they are highly emotionally reactive, especially with anger. They may feel superior – or they might feel victimized (“That’s not fair!”). They might shut down, or become defensive, impulsive, or oppositional. The Teenager is often highly narcissistic and very destructive in adult relationships.

> The Inner Critic has a strong need to be right and to be in control. Highly opinionated, judgmental and demanding, the Critic sees the world and other people as unsafe. The goal of the Critic is to protect the self – but the Critic goes to extremes because it was developed during childhood (children tend to over-react emotionally due to their lack of experience and vulnerability). When there is adult relationship distress, both partners tend to operate from an over-active Critic. The result is anger, blame, and highly negative and exaggerated views of each other. The fear-based Critic in adult relationships does superiority and is often very demanding and controlling.

> The Adult is loving and responsible. Fortunately, almost all of us have an Adult self within us. Almost every human is capable of some level of love and responsibility. In couples therapy we encourage and guide partners to empower the Adult self. In Adult-Adult relationships we mindfully practice healthy relationship skills on a daily basis – skills such as

* Verbal and physical affection and Adult sexuality (loving and responsible)

* Acceptance and open to influence; hearing each-other without judgment

All of us need love in our lives. Adult love relationships can be fulfilling, rewarding, and joyous. They can also be challenging and destructive. When there is relationship distress either partner can step into the Adult role and practice healing acts of love and responsibility for the relationship. When both partners enable and empower their Adult selves, relationships can be healed – and loving, highly satisfying partnerships can be created. For more information about couples therapy and our packages of special services and workshops for couples, please contact us today.