This is an excerpt from the new Connections: Workbook for Couples, which is scheduled for publication in October, 2017. This Workbook is a companion guide to our marriage retreats and couples therapy intensives. It will include information about love and marriage, the true causes of relationship distress, and tools for relationship repair and creative solutions. The Workbook includes exercises designed to help couples create loving connection and partnership. 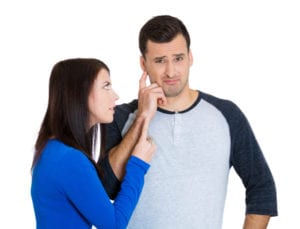 To overstate the obvious, men and women do relationship differently. Women have more relationship skills than men. Men tend to be more disconnected emotionally. Many years ago, I was walking down the beach with my sister and we were talking about these differences. She told me that “All men are emotionally crippled.” This may be a bit of an overstatement, but tragically, it’s mostly true.

The LATE Men – A Major Cause of Relationship Distress
Why do so many men sabotage their most important relationships? I’ve specialized in counseling for men, couples therapy, and personal growth workshops for over 30 years. A majority of these men struggle with relationships and other adult responsibilities. They lack emotional fluency, they’re untrained in relationship skills, they have shame issues, and anger management problems. I call them The LATE Men: Adult men who function as Lost, Angry Teenagers. They are often stuck in an adolescent level of development – literally, LATE to grow into full adult functioning.

The role of men historically has been to protect and provide for their families and community. Men have primarily been defined by their work roles, not by their relationships. But the male role has changed dramatically in recent history, as a result of revolutionary economic and social changes. In the past, there was no need or expectation for men to communicate in an intimate manner. No need to talk about their feelings, to be emotionally sensitive to others, to “validate” their female partner, or to be emotionally supportive in marriage. The LATE Men are relationally behind the times, and their parents didn’t have the knowledge or skills to help them evolve.

The new, more empowered role of women in our society presents a great challenge to The LATE Men. Today, women compete with men in the same workforce, and these enlightened, empowered women expect, often demand that men carry an equal load at home with meals, child care and other traditionally “female” tasks. Those same women also require emotional connection, support, and open communication. But LATE Men haven’t been trained or socialized to meet these new expectations and demands.

In fact, most men are quite limited because, while growing up, they weren’t taught how to feel or to communicate relationally – rather, they were taught to stuff their feelings and to disconnect emotionally and relationally. Psychologist Terry Real says that men have been deprived of their hearts, and women have been deprived of their voice. Men are taught not to feel (historically, only anger was acceptable in men – “big boys don’t cry”). And until very recently women were taught compliance in a patriarchal model of the family – so they had no voice. Women were dependent on emotionally unavailable men, and now many of them are angry and demanding more. The world of relationship has been thrown into a crisis state.

The sad truth is that men want and need connection – including the LATE Men. In fact, they need emotional connection and support just as much as women. But men are afraid of closeness and intimacy because they’re taught to be strong (“be a man”), to be powerful, in control, and to protect against vulnerability at all costs. Psychologist Stephen Bergman describes the “relational paradox” today’s men struggle with:

The boy is placed in a terrible bind: on the one hand, he feels the pressure to disconnect for self-achievement (to be especially good at doing things or fixing things, to be competent in the world); on the other hand, he still has a strong yearning for connection. (from A New Psychology of Men)

Intimacy is threatening because LATE Men don’t have the knowledge or skills to manage the feelings and relationship demands necessary in marriage and deeply committed relationships. That’s an important reason why men tend to sexualize relationships – they are far more capable of sex than they are of emotional intimacy.

What can be done to help the LATE Men and their wives and partners? Couples therapy and counseling for men is highly effective in teaching men emotional and relationship skills, such as:

The Connections Workbook will be available through our web site, and on Amazon.com this winter.

Couples who attend one of our Connections marriage retreats and couples therapy intensives will receive complimentary copies of the Workbook.

For additional information, or to pre-order the Workbook, please contact us today.

Teletherapy – Does it Work?