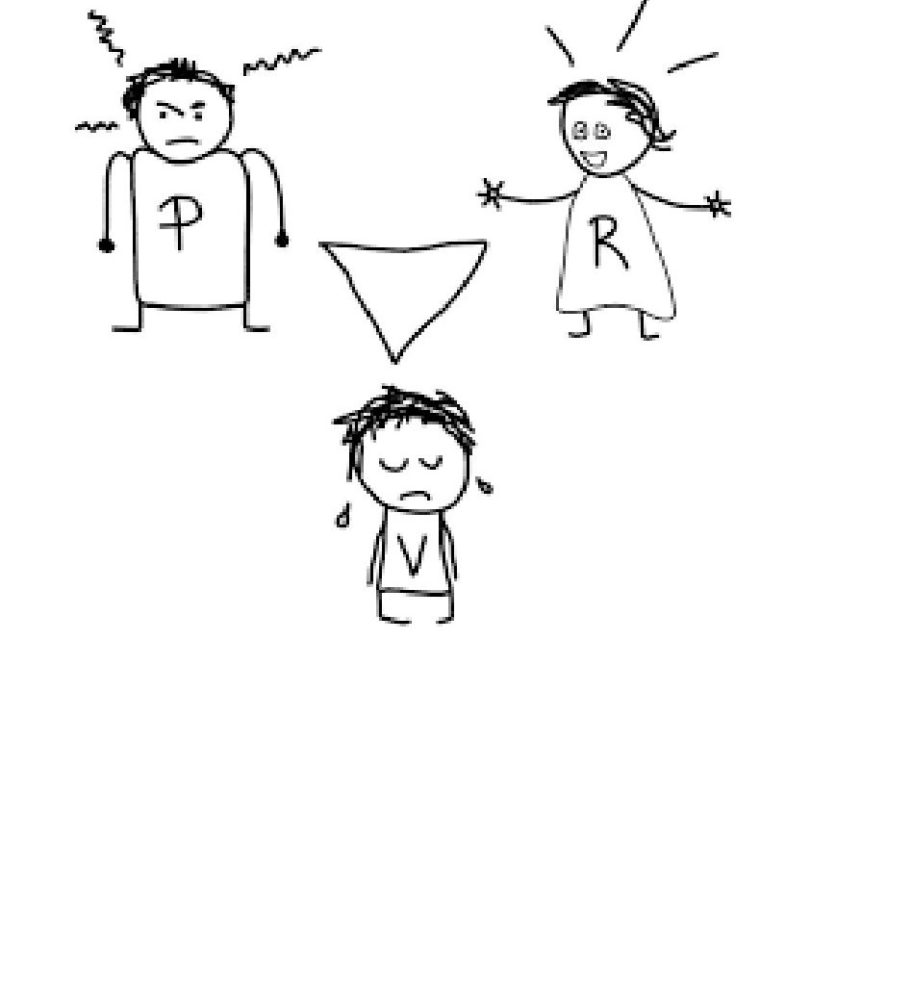 The Intimate Family Drama: Coping With The Holidays

The Dance of Manipulation & How to Change It 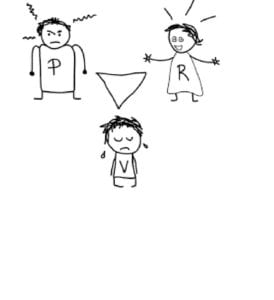 Intimate relationships bring out the best in us – and the worst. When we experience loving partnership, we feel safe, supported and validated. During times of relationship distress, intimate relationships can become a nightmare of tension, conflict, distance – and heartbreak. Couples therapy uncovers and explains the root causes of the intimate drama. A simple and effective way of working with this process was developed over 40 years ago by the psychiatrist Stephen Karpman, M.D. – it’s called the Drama Triangle, also known as the Victim Triangle.

This is the original Drama Triangle (or Victim Triangle) as published by Dr. Karpman. When there is relationship distress, partners assume one or more of these roles. Interactions from these roles are manipulative and destructive. In couples therapy we identify the origin of these roles, which we learn as a result of childhood events (parents and siblings are role models) – the family drama.

Victim – The Victim in this type of relationship distress is not an actual victim, but rather someone who feels victimized or believes they are a victim. They do not see themselves as responsible for their situation or position in life – everything just happens to them, and they don’t believe they have any control. The Victim feels attacked, unloved, betrayed, mistreated, powerless and unable to choose responsibly. To be clear, the Victim’s partner may be critical, blaming, abandoning or even abusive (see Persecutor, below). However, Victims actually choose, unconsciously, to feel like a Victim and to believe they are Victims. Most of the time the Victim role is played by someone who was actually victimized in some manner during childhood (as a result of abandonment, abuse or both).

Victims learn in couples therapy that they are actually manipulative – impulsively and unconsciously. There is an unconscious purpose and intention to Victim behavior – generally expressed in a passive-aggressive manner. Victims are often angry, but will not express their feelings and needs directly and responsibly. For example, a Victim who expresses a great deal of emotional pain after some real or perceived transgression by their partner is actually asking that partner (manipulating) to fix the problem or to take care of them – without taking personal responsibility for themselves or the situation. This may sound something like “That’s so unfair! How could you do that to me? You destroy me with your words!” – said tearfully with dramatic gestures and tone of voice.

Persecutor – The Persecutor role in relationship distress includes blaming, complaining, and critical behavior. Persecutors generally come from a position of superiority, and are controlling, demanding, angry and oppressive. Persecutors believe they are right and justified, while attempting to manipulate their partners to accept blame or responsibility. They have no filter, and impulsively blurt out their negative judgments and demands without regard to their partners. Persecutors often have personality traits of rigidity (obsessive-compulsive) or narcissism (selfishness). Persecutors were often persecuted when they were growing up. They often feel like Victims themselves, and compensate – or “defend” themselves – by persecuting.

In couples therapy Persecutors are relentlessly angry and blaming – “This is your fault. How many times do I have to tell you? You’re screwed up – there’s something wrong with you!” Persecutors may be stuck in an adolescent level of development, causing a great deal of relationship distress. They depend on others for a sense of identity and they righteously and angrily rebel against any perceived violation of their rigid code of expectations. This is the LATE Men I describe in my series about adult men as lost, angry teens (there are LATE Women as well). Persecutors also have an over-active, inflated inner critic – and hidden beneath their angry, blaming exterior is often an injured child who uses the Persecutor role to cope with feelings of inferiority.

Rescuer – The Rescuer perpetuates relationship distress with “good intentions.” The Rescuer tries to fix things and make it all better. There is a strong, often impulsive need to take care of others. Rescuers are often a Survivor Child – a child who was emotionally wounded by abandonment or abuse, and learned to cope and survive by taking care of others. In that manner, the payoff for the Rescuer is a false type of self-esteem – the Rescuer feels important, sometimes superior, with a sense of meaning and purpose in life. Couples therapy can be helpful for rescuers to identify the unconscious manipulation – to get love and appreciation with caretaking behavior. Rescuing behavior also allows them to avoid dealing with their own problems. Enabling behavior is a negative side-effect of Rescuing (for example, taking care of an alcoholic often enables and reinforces addictive behavior).

The Dance of Manipulation

There are numerous patterns in relationship distress that can be explained by the Drama Triangle. Some common manifestations of this dance of manipulation include

o Persecutor ↔ Victim – The Persecutor blames the Victim (manipulating for control and the need to feel superior). The Victim acts out with emotional drama and passive-aggressive behavior (manipulating for sympathy, love, and stay in a child-like state of dependency), which simply inflames the Persecutor to continue his behavior. For example, a Persecutor is angry and critical, and the Victim tearfully says “Why are you so hateful? Why do you treat me like a child? You make me feel so worthless!” The Persecutor reacts defensively, and more aggressively: “Stop acting like a baby! Why don’t you grow up!” This pattern is terribly destructive to intimate relationships and almost always requires couples therapy to heal the emotional damage.

o Victim ↔ Rescuer – In this type of relationship distress the Victim feels abandoned, unloved, unimportant, and “less than” (usually based in shame and fears). The Victim may have addiction issues, and there may be narcissistic personality traits (it’s all about the Victim, their problems, their inability to deal with things, etc.). The Rescuer partner tries to fix it. The Rescuer is a classic enabler, and co-dependent. The Rescuer’s caretaking behavior contributes to the Victim’s dependent position, almost inviting the Victim to under-function.

o Rescuer/Victim ↔ Persecutor – The Persecutor blames his partner, who goes into the Victim position and feels attacked, stepped on, and unfairly treated. To cope with this type of relationship distress the Victim often becomes a Rescuer, working overtime to help and care for the Persecutor. The goal, and manipulation, by the Rescuer/Victim is to avoid dealing her problems and ineffective coping skills, and to earn the love and appreciation from the Persecutor, who will never be satisfied. The Rescuer is going to the hardware store looking to buy milk.

I recommend 6 steps to change the Dance of Manipulation from drama and relationship distress to responsibility and loving partnership. Couples therapy is often necessary when there is too much tension, fighting and distance. With or without marriage counseling, these steps will help most couples to reconnect with love and partnership.

1. Responsibility – We co-create relationship distress and both partners are fully responsible for the Dance of Manipulation. When there is relationship drama, it takes two to tango (to create the dance). It only takes one partner to stop the dance. Responsibility is based in responsiveness – responding appropriately to one’s partner. Responding with love from a position of accountability is the key. It’s about doing the right thing with love – being there, being responsive and supportive without rescuing or persecuting.

2. Give Love – Generous acts of love include respect, appreciation, interest and support – in addition to affection and physical intimacy.

4. Don’t React – Do the Opposite – The drama triangle, and the Dance of Manipulation, are all about emotional reactivity. On the triangle, we react emotionally from victim (hurt, treated unfairly, attacked), persecutor (angry, blaming), or rescuer (afraid, insecure). In couples therapy, partners learn how to do the opposite. Starting with the breath used in mindfulness techniques, couples learn to focus on their own emotional reactions first. They make a conscious (mindful) decision to let go of the impulsive need to react. Then couples learn to do the opposite – responding instead of reacting. The opposite behavior might be to express appreciation, understanding, empathy and love. Other opposite behaviors include accepting influence instead of reacting defensively; or setting a boundary instead of reacting with anger or victim behavior.

5. Express Needs Assertively – Here is an example of very common victim behavior in distressed relationships: “I shouldn’t have to ask him. We’ve been together for years and he should know what I need by now.” He’s not a mind reader. She has the right to be empowered and ask for what she wants. And she needs to be clear and specific to avoid any misunderstanding.

6. Practice Gratitude and Forgiveness – Human beings are imperfect and relationships are imperfection X2. We tend to expect too much from each other. And all of us learn to do drama from others, especially our parents when we were growing up. This last step is often the most powerful in changing the dance of emotional reactivity. It’s also the one step we have the most control over – because it’s not interpersonal – it’s intrapersonal (within us, and up to us as individuals). A daily practice of gratitude and forgiveness is highly recommended. And it only takes a couple of minutes. It can be done during a brief meditation, and it can be written in a journal. Simply list 3 or more specific things about your partner that you’re grateful for; and 3 or more specific incidents that you will forgive. You should never tell your partner that you forgive them – it’s another way of blaming them (“I forgive you for being such a jerk yesterday.”). Forgiveness is simply letting go – of blame, anger, and hurt feelings.

Couples therapy is highly effective in transforming relationship distress, the Dance of Drama and Manipulation, into healthy adult intimacy. For further information, or to arrange a consultation with one of our relationship experts, please contact us today.

We are looking to add additional counselors and therapists* to our outstanding team for couples’ and men’s individual or group sessions. Please inquire with Richard Loebl today if you’re interested in working with us here at the Relationship Center of South Florida.